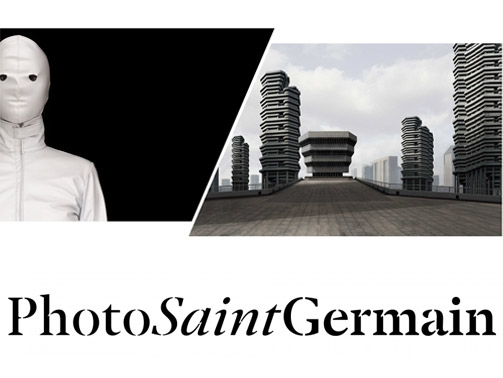 In the framework of Saint-Germain pictures

Do you want to create a new world? A "Novoland", a new promised land? Well, fear not: nothing is easier! First, designate a visual element in your image. Any: for example, an ordinary window or a simple individual. Then duplicate it at will with your software. Assemble the modules thus cloned, arrange these avatars in space… You will obtain a wall riddled with formally identical skylights, proudly rising towards the heavens. Or a crowd of “replicants” with disembodied and rigorously similar silhouettes, ready to colonize every part of the planet ... even the galaxy! Finally, model the aggregate of matter thus produced to your liking, polish the sketched staging, and you will have created your own modernist architectures, your futuristic landscapes and your most extravagant science-fiction scenarios, like the works photographs of Philippe Calandre and François Ronsiaux.

Yet this is certainly where art's inexhaustible creative force resides: in its capacity to use the imagination to forge a new world - or a new degree of reality. Like a "demiurge" who, since the cosmogonic writings of Plato in the Timaeus, is thought out on the model of an artist or a craftsman building the universe according to his own laws, from a "primary element" (called arkhe in ancient Greek), with which he composes. It is moreover quite striking to note that this arkhe, which gives in our language the term "archetype", would designate just as well this simple multiplied window, forming the brutalist buildings that Philippe Calandre erects like monoliths (Five square), that this distressing clone equipped with a briefcase, that François Ronsiaux duplicates in floating panoramas where everything seems put on hold (Sentinelle).

One would readily speak of "fantastic realism" in the face of the astonishing urbanistic constructions of Modular Standing. Or in the face of fictitious situations, populated by mysterious characters, offered in particular by Portal, as if the key to the script had escaped us for good. We oscillate between floating and tensioning. We bathe in a nebulous atmosphere conducive to doubt, paranoia and delusions of reason: who erected these concrete monsters? What is hiding behind the windows of Suntec City climbing to infinity? What authoritarian and anonymous power crushes civil society under their weight, as this photographic series suggests? And how will unravel these "freeze frames", which one scrutinizes with a dubious eye, and whose ghostly protagonists, molded in their white latex jumpsuits, move into sanitized business districts where the insidious plots (La Défense, proposal)?

At the edge of silence

But if there is one impression that emerges from the images of Philippe Calandre and François Ronsiaux, it is this “silent dehumanization” which crystallizes on the one hand in “disastrous” architectures where men, ephemeral and insignificant creatures , find themselves caught in their own trap, swallowed up by these glass and concrete giants that they gave birth to ... And which now overwhelm them with their omnipotence, like a monument with icy and angular edges, ready to absorb any vital force emanating from the company. A mutic dehumanization which finds its symbol on the other hand in these immaculate and neutralized white outfits, flags of an ultra-sanitary and formal society, haunted by the idea of ​​surviving its own disappearance, dressing here and there a missionary clone of 'a briefcase in the middle of disturbing futuristic and misty landscapes. " The eternal silence of these infinite spaces frightens me », One might say, using the words of the philosopher and mystic Blaise Pascal (Thoughts, "Disproportion of man"). Like him, we would feel here lost between two orders of magnitude. Outside, the endless immensity of an expanding universe, or a world of alienating asphalt. In us, the presentiment of the miserable " vanity Of our condition.

Our gaze is then caught between two atmospheres, two antinomic motifs: gray megalopolises and vaporous nature, lines of sharp ridges of buildings (Floating Module) and veil of mist enveloping the landscape in its clouds (Blue Lake). Everything shows itself to be too ethereal and dissolved, or too hard, smooth and brittle, for our understanding to take hold in the face of these unknown "places" (topos in ancient Greek), utopian or dystopian, and disentangles the enigma that inhabits them ... These "Novoland", places of all possibilities, appear in this to be the variants of a surveillance society which finds its strictest model in Singapore . The architectural elements of Suntec City also decline the constructions of Paul Rudolph dating from the 1980s in the island city, while the omniscient eye of The Prisoner and the cameraAction in Paris both overlook our police existence - and this since the establishment of the “Bertillon system” by the Paris prefecture at the end of the XNUMXth century.

An ocean in a drop of water

From then on, everything would be nothing more than a question of order in “Novoland”: putting in order the city and the buildings which form it, the society and the individuals who compose it. This ordering of the world seems to take into account the principles of Monadology by the philosopher and scholar, GW Leibniz. Let a monad designate a " raw substance », Or the minimal unit of which everything is composed, in the wake of ancient atomism. Like a cement factory window that Philippe Calandre's architectures repeat like a motif, following the greatest economy of means: the utopias he draws are born from this aggregate of homogeneous pixels. Or a monad which, like the “Guides” imagined by François Ronsiaux (these hermaphrodite latex creatures, of identical appearance, which reproduce by duplication), is defined both as an individuated being, and as the simple link of a larger whole: here, a universal community preparing "a new horizontal world order", in line with authoritarian fantasies and conspiracy theories.

This reduction of the living to its most elementary degree would give rise to fear of an impoverishment of beings and of the universe, as in George Orwell's “Novlang” which narrows the range of our vocabulary, and thereby standardizes our expression and our feelings. However, let us listen to Leibniz's visionary flights one last time: “ Each portion of the material can be thought of as a garden full of plants, and as a pond full of fish. But every branch of the plant, every limb of the animal, every drop of its humours is still such a garden or such a pond. », Describes the philosopher, prefiguring the fractal figures of mathematics, where each object is thought of on the model of Russian dolls. Everything appears in fact as a set of monads, themselves made up of a multitude of other smaller monads, having the same structure. They reflect, like a " mirror », The individual they constitute, but also the entire universe in which it evolves: the smallest prefigures the largest. Thus, if we are only a grain of sand drowned in the cement of cities, the radiating buildings which spring from them in turn reflect, in all their splendor, the elementary composition of the granules of which they are made. Yes, we are just a droplet " indistinguishable In the ocean enclosing these utopian city-islands. That a tear whose melancholy is reflected in the clouds vaporizing a distant land, a gray day of life, somewhere deep in the universe… So much for poetry… And it is already so much!

Art critic member of AICA-France (International Association of Art Critics)
Teacher at the University of Paris 1 Panthéon-Sorbonne, and Paris 8 Saint-Denis, as well as at the ESAD in Reims